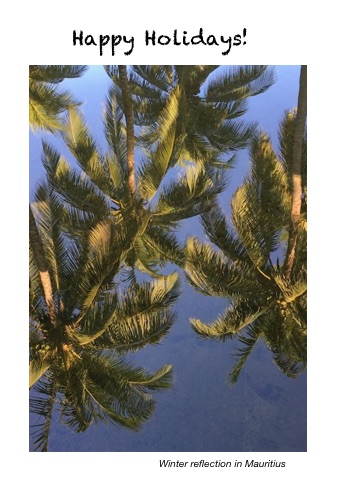 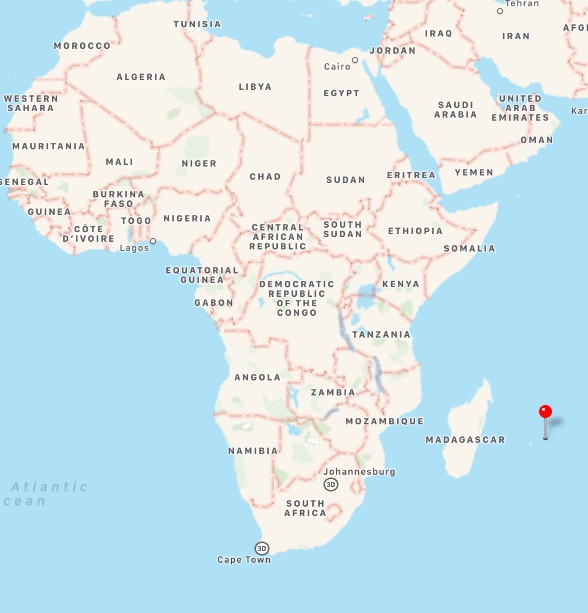 So why a balmy, tropical beach scene for our yuletide greeting?

And why do the coconut trees seem to be upside down?

A few reasons (or maybe a bit of rationalization).

First, about the image: It captures a watery reflection on a winter's day in Mauritius, a tiny island nation out in the Indian Ocean, about 2,000 kilometers off the eastern coast off Africa.

It is considered part of that continent but is not to be confused with Mauritania, another African nation on the western seaboard. Mauritius was one of the last pieces of land on earth discovered (invaded?) by humans, who, doing what they do best, proceeded to wipe out another species, the Dodo bird. The atoll is below the equator, at about the same latitude south as Hawaii is to the north and, hence, has a very similar climate. The photo was snapped in late June, the start of summer in the northern hemisphere and conversely the onset of winter in the southern hemisphere.
So what we have is an upside-down image of tropical trees taken in the southern hemisphere in winter there  to express a warm "Happy Holidays" during the northern hemisphere's chilly season.
One of the most remarkable things about Mauritius is its culture. You will see Buddhist and Hindu temples, Islamic mosques and Catholic churches. And they seem to get get along just fine. One reason might be the entire country (about 1.3 million people) celebrate (i.e. take a day off) for each religion. That's a pretty clever incentive.

Peace on earth and good will to all.